The Most Instagrammable Places In Ireland 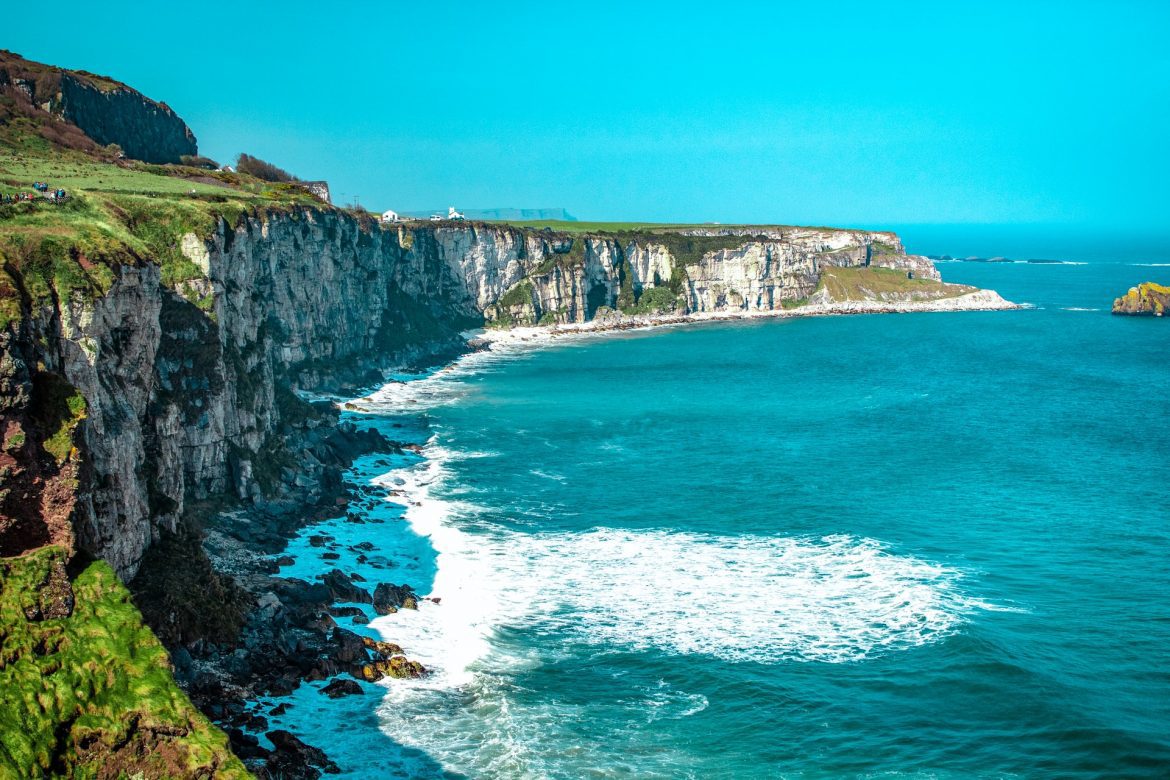 If you’re looking for a place to take photos and share them with your followers on Instagram, Ireland is the place for you. From popular landmarks and rarities to natural wonders, Ireland has got all the charm. For your ease, we’ve handpicked 17 most Instagrammable places around Ireland that will help you gain insta-followers in no time!

17 Most Instagrammable Best Places In Ireland:

Ireland often called the Emerald Isle, is a small country with lush landscapes and so many hidden gems. It’s no wonder that this island nation has become so popular on Instagram.

With plenty of castles, old buildings, and stunningly beautiful coasts, Ireland has plenty of photo-worthy attractions for anyone looking for a pretty background for their next post.

Just imagine the likes and comments you’ll get once you start sharing photos from these incredible destinations. Here’re the 17 most instagrammable places in Ireland:

The Giant’s Causeway is a very popular tourist attraction in Northern Ireland. It’s a site of great historical and geological interest, with almost 40000 interlinked basalt columns formed from a volcanic eruption years ago. This excellent site saw 998000 visitors in 2019, many of whom came to see the impressive numbers of these dark-grey-to-black rocky formations.

Every year, millions of tourists visit the site to marvel at the unimaginable numbers of basalt columns and get an Instagram click (not everyone, though). UNESCO officially included this place in World Heritage Sites in 1986.

Titanic Belfast is an excellent building with a vast floor area of 12000 square meters. It’s located in the city center of Antrim county. It was inaugurated in 2012.

Titanic Belfast also received a World’s Leading Tourism Attraction Award in 2016. It is a primary tourist attraction site that had attracted a considerable crowd consisting of 841,563 tourists between 2017 and 2018.

The Dark Hedges in County Antrim is a row of beech trees planted in the eighteenth century by the Stuart family. The trees run beside a road that has long been known as Bregagh Road. There is also Hedges Hotel, named after the lane of these dark trees. The giant trees have covered the road from both sides along its length, which is a treat to watch.

The Dark Hedges is the favourite place for photographers and Instagrammers to capture remarkable shots. The shooting of the best scene, “The King’s Road” in the famous TV series Games of Thrones, also took place in the Dark Hedges.

The Cliffs of Moher are some of Ireland’s most famous landmarks. They are located in County Clare, along the Atlantic coast. The cliffs extend for over 14 kilometres and reach heights of 700 feet.

Although clearly beautiful, the tower is now a remarkable attraction for Instagrammers and photographers for some great shots.

Furthermore, the movie “Harry Potter and the Half-Blood Prince” was partially filmed at this location. So, what more can we need for a perfect Instagram pic!

Doolin is an adorable village towards the west of Clare, the Irish county. Its peaceful greenery and beautiful tiny homes built in the same structure attract tourists.

Doolin village is the doorway to the famous Aran Island, which contains historical sites. This village exhibits traditional Irish music and other festivals in the best possible way.

Cobh is an Irish seaport town located in Cork county. It is a rough and crowded town in Cork. Its port is inhabited by 13000 people who deal with the cruise ships arriving at the terminals.

Cobh was formerly named Queenstown because it is the last port where the huge Titanic ship stopped before sinking in 1912.

Kinsale, a town in Ireland, is a few miles away from Cork. It’s a popular tourist destination because of its beautiful scenery, colourful houses, and unique shops.

Furthermore, there’s also a yachting marina that attracts sailors from around the world. It’s a place to get away from it all, with its peaceful scenery and wind at the seashore.

Malin Head is a village in the northern Irish county of Cork. It’s also a famous tourist spot with various beaches and dramatic landmarks, located over the Inishowen peninsula. It has a fantastic weather station as well.

Malin Head had an ancient building named “The Tower.” Afterwards, a famous scientist, Marconi, established the wireless Radio Station in place of that tower.

The unforgettable beauty of Malin Head leaves a long-lasting attraction in its visitors and Instagrammers.

Malahide Castle is an antique fort situated near Malahide village in Dublin, Ireland’s most populous county. It is a massive fortress that amazes the tourists with its remarkable architectural shape and design.

King Henry II gifted this giant fort to Richard Talbot (Former Lord Lieutenant of Ireland) because of his undeniable services to the country. Talbot’s family has been living there since 1185.

Ha’pennyBridge is a pedestrian bridge located in the Dublin county of Ireland. It is officially known as the Liffey Bridge because it is constructed over the Liffey River.

Before this bridge, people used ferries to cross this river. It is designed in such a way to overcome the need for ferries. It has a unique appearance to engage tourists globally.

Many visitors approach this bridge to place love locks. This act is considered an indication of love between the couples.

The Spire of Dublin is a vast steel monument with a needle-like tip. It is a 120 meters high monument in the Dublin county of Ireland. Another name for this Spire is “Monument of Light.”

It was built to fulfil the loss of Nelson’s tower. It represents the colourful lights and high blue skies in Dublin’s Irish capital.

Ian Ritchie designed the Spire of Dublin and won the Dublin City Competition for this considerable achievement.

Poolbeg Lighthouse is a lively lighthouse that helps the people of Poolbeg in Dublin county navigate. It is present near the Liffey River.

It is a famous tourist destination with its 11 km walking route that is the longest in Europe. Its graceful red colour enhances its beauty and attracts visitors to itself.

The Gap of Dunloe is a narrow pass between the mountains, distinguishing between the Purple Mountain range and the MacGillycuddy’s Mountain range. It is located in the northern south of the Irish county Kerry.

Tourists love to visit this place and walk on its long track, approximately 6.8 miles in length. We can also take a ride to cross this gap, but walking is the best choice to feel the nature and calm breeze.

Skellig Michael is an island in Kerry, Ireland. Its shape is like a mountain and is also known as the Great Skellig. It is uninhabitable due to its steep land. However, it is the home of different animals like gannets, puffins, razorbills, and a few grey seals.

Skellig Michael also has a twin-island known as Little Skellig. It has a total area of 22 hectares covered by steep rocks.

Archaeologists visit this island frequently to examine the remains of the famous Monastery, built on this island in the 6th century.

Ladies View is a fantastic tourism destination in Kerry, Ireland. It is just 19 kilometres away from Killarney, near the Killarney National Park.

Queen Victoria visited this place back in 1861. She was carried away with its beauty, and her ladies-in-waiting gave this place the title the “Ladies View.”

Daily Edge has declared Ladies View as the most searched place on Instagram. Ladies View is always the first option for all photographers who aim to capture nature’s beauty.

Ashford Castle is a vast fort located in one of the seven counties of Ireland, Mayo. It is an almost 800 years old castle, expanded incredibly on 350 acres of area in Ireland. They donated this property to the Irish Government in 1915.

Noel Huggard purchased this Castle from the Government and converted it into a five-star hotel. Unfortunately, Noel could not make it a global landmark despite its ancient and tremendous architectural shape.

However, a famous hoteling company, “Red Carnation Hotels,” bought this castle in 2013. They restored this already converted hotel uniquely. They installed a Cinema, Cigar terrace, Billiard room, and several other necessary additions to engage the customers.

Ashford Castle was declared the Best Hoteling site in Ireland after its modifications under the supervision of Red Carnation Hotels. Many tourists visit this place to enjoy its food and scenery.

Lough Tay is a tiny lake present in the Wicklow Mountains and Glendalough. Lough Tay is a private lake. Therefore, a minimal number of tourists are allowed to visit the lake.  Lough Tay is present between Luggala and Djouce mountains.

It is the most admired and photographed tourist destination due to its charming landscape.

Lough Tay is probably the most liked Irish lake on Instagram.

Things To Do In Cork At Christmas – Cork Xmas Guide

Some Of The Most Instagrammable Beaches In Ireland